There is one thing in particular I don’t understand about Google: why they still insist on showing the “I’m Feeling Lucky” button in their pages. For the few ones who don’t know, it takes you directly to the first result of your query, skipping the SERP. Not a big deal indeed.

That button totally lost its already limited usefulness when Google launched Instant back in 2010. This powerful feature “dynamically displays relevant search results as you type” and predicts “the rest of your query (in light gray text) before you finish typing”. So, when you start typing you are immediately thrown into the SERP. There are only two ways to still use the button:

And I’m considering only the desktop layout: I can’t see that button/link anywhere on mobile, please correct me if I’m wrong.

Fun fact: clicking on “I’m Feeling Lucky” from the Google homepage (without typing anything in the search bar) you’ll go to the Doodles homepage. Also, I recently noticed that on the English page (I usually use Google in Italian), when you hover the pointer on the button, it randomly changes its call to action to “I’m Feeling Stellar”, “I’m Feeling Puzzled”, and so on. Of course each of them sends you to a different Google property.

But the biggest reason why that button shouldn’t make sense to Google is this simple one: money loss. Back in 2007, Marissa Mayer (Vice President of Google Product Search at the time) estimated that only 1% of all Google searches went through “I’m Feeling Lucky”. A small slice of a huge pie, that cost the company around $110 million per year according to Tom Chavez, CEO of Rapt at the time.

To give the users the chance to skip the SERP means to give them the chance to skip all the AdWords listings, and this goes against everything Google did in the last years, which is mainly about monetization (the four ads layout, just to give an example).

Nonetheless, that little way to escape this massive money machine is still there — spotted by few and used by even less — apparently without a sensible reason.

What I’ll try to do now is to list the possible reasons why Google still doesn’t ged rid of it, suggesting at the same time some alternatives to replace it.

You know when you activate some useless setting on your smartphone just to give it a try, then you leave it there simply because you forgot it? Think about it: no one uses that button, no one talks about it, it doesn’t show up on mobile search, younger users may not even know it exists… Chances are that Google itself forgot about this feature and keeps it there unintentionally, just because no one notices it anymore.

Google has built a monopoly year after year and its empire is still growing. Even the greatest stories of success, though, sometimes rely on wrong beliefs or superstitious behaviors. What if they were keeping that button live just like a sort of lucky charm? What if “I’m Feeling Lucky” was just an amulet they are afraid to get rid of, just because it’s been there almost since the beginning?

Imagine the Google homepage with a single button under the search bar. It doesn’t look that bad, does it?

But maybe they prefer the 2-button layout, that’s fine. Here are few suggestions I’d like to give them to replace the pointless button with something else.

When “I’m Feeling Lucky” was launched, it was a strong marketing statement. It was like:

Hey, we’re so good and confident in our job that you don’t even need to search for something, we send you out directly to the best result

Today, things have changed a lot. Some major features recently released by Google clearly have the sole purpose of increasing the monetization of every search. Even innovations like featured snippets and AMP pages, in reality, could threaten the diversity of the web ecosystem, forcing every search into a closed path where every touchpoint resides on – and is owned by – Google.

If we take this dystopian scenario for real, the “I’m Feeling Lucky” button is likely the last little piece of humanity that keeps Google from yielding completely to the dark side. 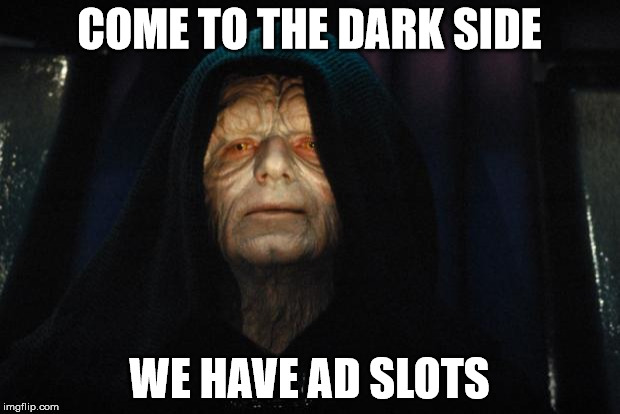 SEO and content specialist in Milan. Not so good at social media. In love with web, writing, music and hi-tech. Read more about me or get in touch.

This website uses cookies to ensure you get the best experience. Got it Reject Read More
Read more
Necessary Always Enabled